Menu
Home » Gossip » OMG! See Why This Woman Is Called The ‘Snake Woman of Africa’ (You Need To See This)

OMG! See Why This Woman Is Called The ‘Snake Woman of Africa’ (You Need To See This) 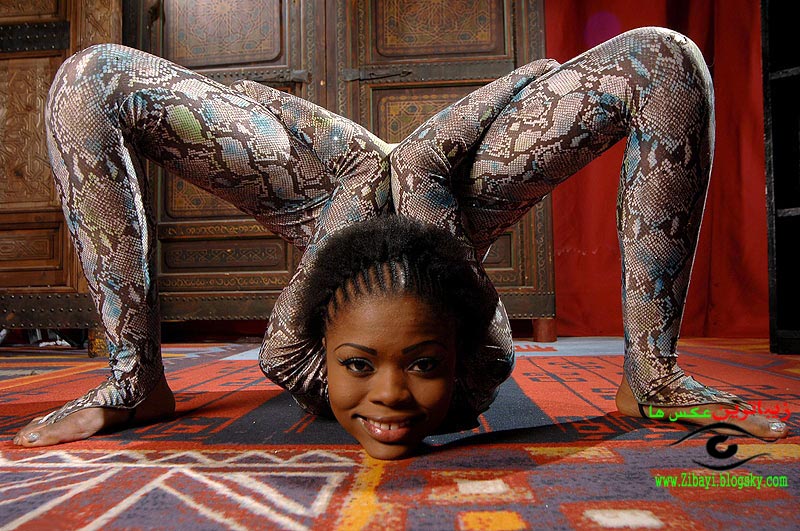 Seeing is believing! It may seem like a make-believe story if you are being told there is a someone who is able to twist her body into different shapes and forms.
While it is understandable that some people’s bodies have changed and become flexible because of the series of exercises they do, we also have to understand that some people are naturally flexible.
There is an extent to which a full grown man can twist his body irrespective of his flexibility. Anything that passes that level is thought to be scary as people worry about the person breaking a bone or twisting the organs of the body.
Some people simply cannot watch when they see flexible people pull off their stunts; they feel those extremely flexible people are no longer human since their bodies can be likened to a rubber that stretches and go back to its form.
But when it comes the lady that is referred to as the snake woman of Africa, you will be totally amazed. This lady has defied the odds when it comes to flexibility; she has won the hearts of many people within and outside the African continent.
She is gifted and unique in her own way; she is able to throw her body into awkward shapes and positions with little or no efforts. The clothes she wears are snake-like making her look more slithery when she changes position.
This is simply flexibility at its peak; this African woman got her title as a result of the unique talent she has. Find below some of the pictures of the woman called the snake woman of Africa:

The snake woman is a South African who is known as Lunga because of her ability to contort her body. You may never see this as big deal until you get into that position. She can bend her body in ways that will make you feel like she does not have bones at all.

For her to able to smile in this position, then you have to know she is not in any form of pain. She considers it normal for her to be able to move her body as she wants.

According to the snake woman of Africa, the ability to twist and turn her body into these positions was inherited from her grandmother.
Even though she never met the woman, she was told she had the ability to do everything the young lady does with her body.

This young lady considers herself to be a contortionist even though she has no professional training.
She has what it takes to move her body round. Having this ability felt weird to her at first until she heard her history.

Growing up was fun for her as she used to contort her body while in bed; her ability to move like a snake has given her the title.

Being able to move like a snake is a natural thing for this young lady; she feels totally comfortable doing all the moves since the ability is innate.
Posted by mediaceo
Labels: Gossip
Email ThisBlogThis!Share to TwitterShare to Facebook
at 03:07