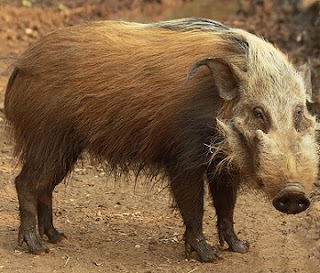 Like a scene from a movie, an Ado-Ekiti Magistrates’ Court was yesterday told how a hunt­er, Ganiyu Abdulla­hi allegedly killed his friend during a hunt­ing expedition. Abdul­lahi said he saw a pig and shot it only for the pig to turn out to be his friend.
The court remanded the 33-year-old hunter, in prison custody for allegedly killing his friend who he alleged changed into a pig.
The Magistrate, Modupe Afeniforo, who adjourned the case till November 11, directed the prosecu­tor to duplicate the file and send it to the Di­rector of Public Pros­ecution for legal opin­ion.
The police prose­cutor, Monica Ikebulo told the court that the accused shot at a bush pig which later trans­formed into his friend.
She said the ac­cused committed the offence on September 9 at Iwaraji Camp via Efon Alaaye in Efon Alaaye -Ekiti.
According to her, the accused on the said date with eight of his colleagues now at large went for group hunting and unlawful­ly shot his friend, Igin­la Oluwashina, with his gun.
She said the offence contravened Section 319 of the Criminal Code, Cap C 16, Laws of Ekiti State. 2012. No plea was taken
Posted by mediaceo
Labels: Gossip
Email ThisBlogThis!Share to TwitterShare to Facebook
at 06:19