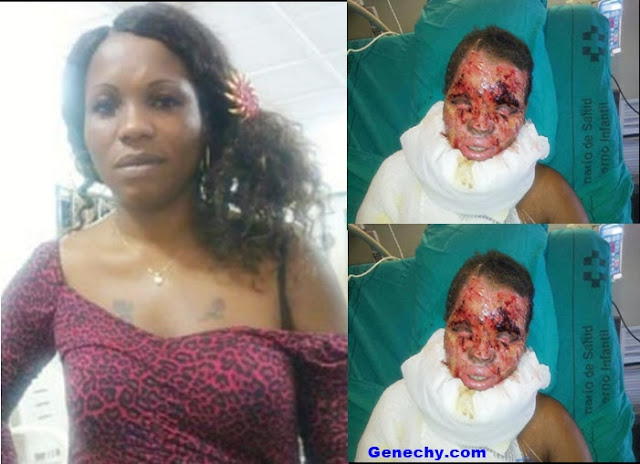 Marbel Mark, 31, from Edo State but married to a man from Delta State, has petitioned Edo Police Command, urging investigation into the acid bath she suffered in the hands of some persons now at large.
The incident happened in October 2015, when the victim, based in Spain, with her seven year-old daughter, visited Nigeria.
Trouble started when she was said to have visited a native doctor at Sakpoba Road, Benin shortly after her arrival in Nigeria. Though the relationship between the woman and the native doctor could not be ascertain, it was said that the wife of the latter became jealous of the alleged ‘close relationship’ between the Marbel and her husband and decided to fight Marbel.

She accused her of having an affair with her husband but Marbel refuted the allegation vehemently, insisting that the relationship between her and the husband was purely business. But of course the wife did not believe her story and continued to protest.

According to Vanguard, the wife feared Marbel may be using her connection abroad to make her husband dump her. It was learnt that the situation took a turn for the worse when the native doctor’s wife called Marbel’s husband in Spain to report the matter to him.
It was gathered that the incident caused problems between Marbel and her husband.

Tragedy struck, however, when Marbel went to the salon to fix her hair, as unknown persons stormed the place and bathed her with acid. The incident caused pandemonium as people ran helter-skelter, a situation which gave the suspects the opportunity to escape.

Marbel was rushed to the University of Benin Teaching Hospital (UBTH) for treatment before she was flown back to her base in Spain for surgery. In the midst of the tragedy, Mabel was said to have sued her husband for divorce, which was said to have been granted by a court in Spain.

Though the reason for the divorce is unknown, it was gathered that Marbel’s husband and the native doctor’s wife continued their communication to the discomfort of the victim. However, Marbel, who is still receiving treatment in the Spanish hospital, is appealing for justice from Edo State Police Command.

Speaking to Vanguard on telephone, she lamented:
“I have spent so much hospital bills to save my life due to the wickedness of somebody. I have petitioned the state Police Command through my lawyer. I am only appealing for justice. The police must apprehend the person that bathed me with acid and those that sent them. I have spent all I have on hospital bills so I cannot equally be denied justice in Nigeria.


I only came on holiday but look at what I got in return. I need the prayers and help of everyone, particularly the police so that those behind this will be apprehended. I am in pains and those behind this should not go unpunished.

And I appeal that the investigation should be accelerated because justice delayed is justice denied. Life has become so frustrating but I thank God for his mercies.''

The matter is now being investigated by the homicide section of the Edo Police. It was said that the wife of the native doctor has been interrogated and some other persons questioned also.

Spokesman for the state Police Command, Abiodun Osifo, said:
This is a crime against God and humanity and we must not condone it. How can somebody bath a fellow human being with acid? Even if the person is your enemy, does that make sense? Such people must face the law no matter where they are hiding. You cannot run forever.”
Posted by mediaceo
Email ThisBlogThis!Share to TwitterShare to Facebook
at 09:52