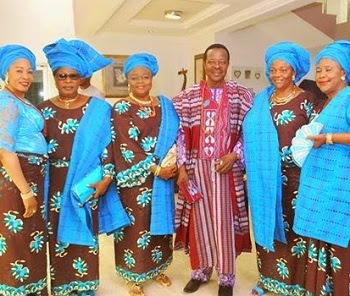 The popular traditional music legend,  King Sunny Ade has explained why he actually stopped marrying more wives after marrying seven women already.
The KSA, as he is fondly called said that he restrained himself from adding to his seven wives because of his female grandchildren.
The veteran musician stated this during a media chat, a prelude to his 70th birthday celebration on September 22
When asked how soon he would add to his harem? “Are you praying for me or cursing me? If you see some of my grandchildren, you’d marvel and that’s the reason I sometimes forbid them from going out with me. A lot of times people had said, “good afternoon madam, how are you madam?” to some of them and I would interject, “she’s not madam o, she’s my grandchild,” he answered.
The popular artiste denied dating veteran songstress Onyeka Onwenu at some time point in the past after their evergreen duets, ‘Wait for Me’ and ‘Choices’ in the late 80 ignited romance rumour then.
His word, “I didn’t have a crush on her or any other female singer of that time. She was a good girl. Recently, we performed together again two and a half months or so. Before then you’d probably remember that the day I played with Wizkid, she also came onstage to sing her style of music. So, we’re just colleagues and we do shows together.”

Posted by mediaceo
Labels: entertainment
Email ThisBlogThis!Share to TwitterShare to Facebook
at 08:23