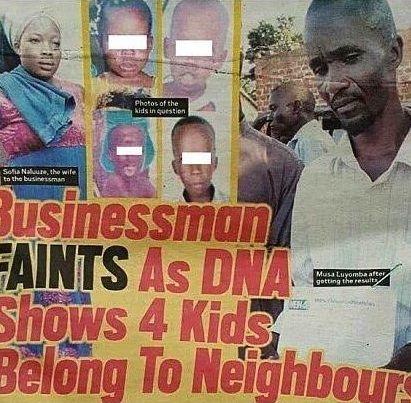 A man who is married to a good and faithful wife won't know what God has done for him. The men who find themselves in the mess of living with wives like the one above should seek God's intervention.
According to newspaper report, the husband has been hearing "bad" stories about his wife but ignored until it got to a point when people he trusted started saying the same thing. He quietly took "their" 4 kids for a DNA test and, sadly, it was confirmed that he's not the father of any of the children.

The man confronted his so called wife and with some serious pressure from other family members she was said to have confessed that she's been having an affair with their neighbour for many years. The stupid man was nabbed, tests were conducted just to be sure and they all came back positive. Hmmm!

People should try and pray seriously before getting into marriage. It would save you from future regrets.
Posted by mediaceo
Labels: Gossip
Email ThisBlogThis!Share to TwitterShare to Facebook
at 06:37