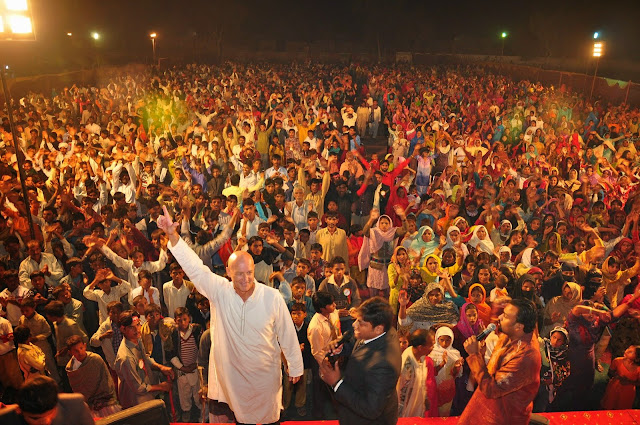 Revival in Pakistan: Pastor Anwar Fazal touching millions in Pakistan by sharing the Gospel in the Islam dominated country. Senior Pastor Anwar Fazal from Eternal Life Ministries (ELM) in Pakistan arranges a big Healing Crusade every Wednesday in Lahore, and thousands of People attend every week in Lahore. It is reported as the biggest Healing Meetings in Pakistan by far. Gospel will not stop, but it will go to the ends of the world.At one rally in Pakistan 10,000 Muslims accepted Christ in one night, and over the course of the week-long rally there were many miraculous healings and more than 150,000 Muslims were saved out of 200,000 that attended.
The personage of Christ himself has been appearing to Muslims across the Middle East in the form of visions, proclaiming that He is indeed the King of King and Lord of Lords, and that He will soon be returning to claim His throne.The Work that ELM church does, and the incredible feeling of hearing 10,000 Muslims shouting, “Hallelujah! Hallelujah! Hallelujah!” as they defy the certain death sentence imposed for those who leave Islam and accept Christ as their Lord and personal Saviour.The number of Christians attending the meetings are very high. Generally Christians in Pakistan face persecution from the government and other officials. However, these brothers in Christ are persistent in their Faith in Jesus Christ. This short video is from 3 days Prayer Festival organised by ELM Pakistan shows the love these people have for Jesus. We pray that Pakistan would know that Jesus Christ is the only way to heaven.Their Daily Broadcast in ISSAC TV is watched by thousands of Christians in Pakistan. It is by far the most watched Christian Channel in Pakistan.
Source: Christian Voice
Posted by mediaceo
Labels: news
Email ThisBlogThis!Share to TwitterShare to Facebook
at 06:32