Menu
Home » Gossip » WOW!! Meet The Graduate Who Dumped Her Career To Make Money by Flaunting Her Bu!m Online (Photos)

WOW!! Meet The Graduate Who Dumped Her Career To Make Money by Flaunting Her Bu!m Online (Photos) 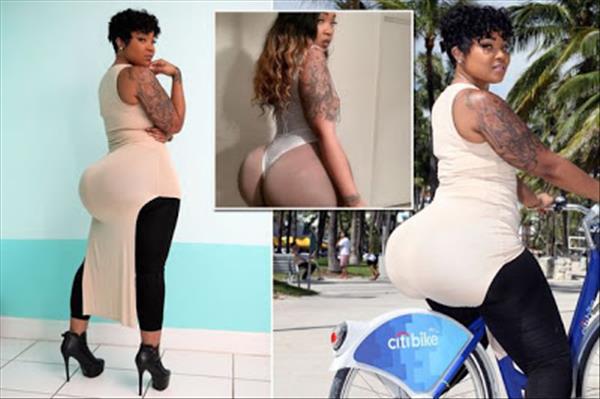 Cam-girl Courtney Barnes
A brainy graduate of Economics has dropped her certificate for a career as a model showing off her massive 59 inch booty to her online fans.
According to a report online, Cam-girl Courtney Barnes, 32 who took three rounds of illegal bu!tt shots six years ago to make her bu!m massive in the US. After the surgery, she ended up with a much bigger behind than she expected, but the Internet star is now able to use her sizeable assets to her benefit.
Revealing details about how it all started, she said told TheMirror: “One thing that I did learn in economics is that it’s about having a product that people want – and my product is myself right now.
“I want to show men, women, and children that it is possible to be beautiful, smart, and have a big ass.”
The woman who is popularly known as Miss Miami, initially decided to have the illegal silicone injections after working as a dancer whilst studying.
Courtney said: “It was a risk I was willing to take at the time and I was lucky not to have any complications.
“I was naive and I admit I didn’t know what I was putting in my body, but at the time a lot of women in Florida were getting it done and I found a local women who could do it.”

The injections which contains fatal substances if accidentally injected into a vein would result to instant death.
Courtney said: “Many people ask me ‘are these injections dangerous?’ And the answer is yes.
“Even if it isn’t fatal immediately you don’t know how it is affecting your body. These are very dangerous products that are being injected.
“I don’t know for sure what they injected me with. But when I got it, she said it was like some hydrogel, some kind of silicone that they normally put in gummy bear implants.
“You don’t know how your body is going to react. It is still something foreign that’s in your body. It’s a gamble.
“A close friend of mine got it removed and she ended up having to have blood transfusions and she was in the hospital for months. It was a nightmare for her.”
After her photos went viral, she decided to monetize it and is now making huge sums.
Courtney said: “I was working at a traditional office job at that time and so many pictures and videos of me were going viral just out shopping and dancing in the clubs.
“That’s when I started to model and get myself out there. I knew how to best market myself and the success was almost overnight.”

She now has 379,000 Instagram followers and is a successful model and cam-girl.
She said: “My career is fun but at the same time it is really difficult for people to take you seriously when it comes to certain businesses.
“I feel like having a really big butt or having really big boobs, you are completely over sexualized.
“People only want to buy something sexual from you and only want to consider you in that way but I actually have a brain and I’m very business-minded.
“People stare at me everywhere I go and not every reaction is positive. I feel like women are intimidated by me and men view me as a piece of meat.
“I’m actually quite a shy person and being looked at constantly can make me feel uncomfortable sometimes.
“Two times in my life I’ve had guys pumping gas at the gas station and they are watching me and they drive off with pump in their car. It’s crazy, they just lose focus.”
She added: “My butt does not sit up as much as it used to and I can see a little discoloration in the skin.”
Despite this, Courtney insists she will not have any further injections and although she loves her curves, she is considering getting her bottom reduced in the future.

She said: “The body is complex and people are even getting limbs transplanted. So I am trusting that they can figure out what to do with the booty.
“I try not to live with the regrets – I just feel like that this is my story. I made a decision to do something that was a little risky. I wanted more and I didn’t have all the information.
“I trusted people without knowing the full facts and I was lucky that nothing bad happened to me but I’m happy with my look and I love my body.”
And although her path from scholar to cam-girl has been unconventional, Courtney credits her studies for equipping her with the knowledge to turn her bottom into a lucrative business.
She said: “What I do may be different, but my product is myself right now and my bottom is basically my bread and butter.”

Posted by mediaceo
Labels: Gossip
Email ThisBlogThis!Share to TwitterShare to Facebook
at 03:03