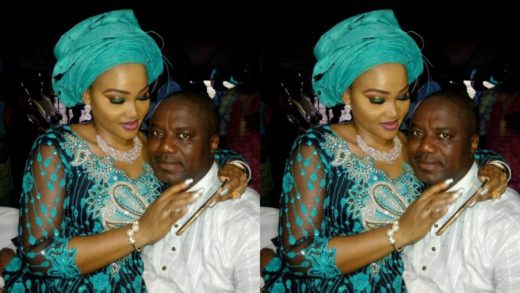 Yes, social media is one of the worst places to look for the truth, that’s because even before the advent of filters and other photo editing applications, the Internet has always been a theatre of absurd lies.
Prior to last week, anyone looking through actress, Mercy Aigbe’s Instagram page would have concluded that she had a perfect marriage with her husband, Lanre Gentry. However, the truth showed its face last week and pictures of Mercy’s badly beaten face which circulated on the Internet became the fodder for jokes, indignation and angst online.

In the course of digging for information on what actually went down in the marriage, Sunday Scoop spoke with a source who once worked with Mercy at her Mag Divas Boutique, located at Omole, Lagos. According to the former employee, the actress and her husband often had quarrels in the boutique.
“Their marriage has always been a ‘strange’ one. On some days, they could come in laughing together and act all lovey-dovey and on some other days, they’d enter the shop arguing and cursing each other at the top of their voices.

“There  have been several times that aunty Mercy and her husband came into the shop arguing at the top of their voices. There was a particular day that the argument was so heated that we thought the situation was going to degenerate badly. They continued shouting even as they went into Mercy’s office. However, they emerged some time later full of smiles and kissing each other. We, the staff, were really surprised and the incident strengthened our resolve not to interfere in their squabbles as they could be unpredictable,” the former staff of Mag Divas said

Recalling another incident of intense anger between the couple, our source said,

“The last scene I witnessed of them was when her husband came into the shop shouting. He accused Mercy of not giving him enough attention. He also complained that she doesn’t always cook for him and their children but prefers going to parties.”

Posted by mediaceo
Labels: Gossip
Email ThisBlogThis!Share to TwitterShare to Facebook
at 06:49