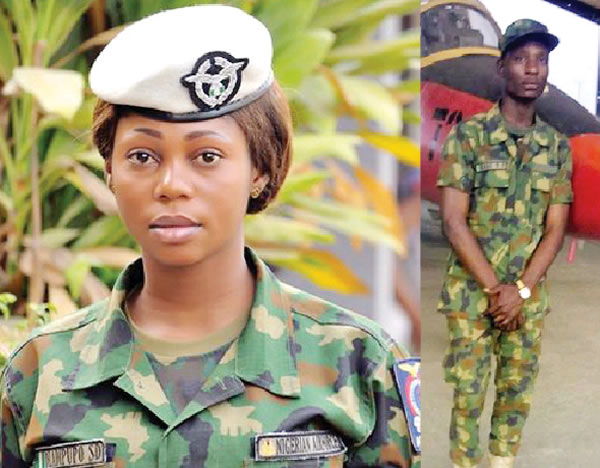 The aircraftman of the Nigerian Air Force, Ben Kalu, who has been in custody for over 2 months at the NAF Tactical Command, Makurdi over the murder of his girlfriend, Solape Oladipupo, at the NAF base in Makurdi, Benue State, will face a court-martial on Friday.

Kalu, who had on Sunday, March 12, shot dead Oladipupo, popularly called Shomzy, in her apartment at the base, on the grounds that she was unfaithful in their romantic affair, would begin the process of court-martial on Friday..

A top NAF source, who disclosed the court-martial on Tuesday, said the long delay in Kalu’s prosecution was because he was attached to the Logistics Command, Ikeja, Lagos State, but served in Makurdi. He said;

“The suspect is still in NAF custody. Everything has been going step-by-step. He will be court-martialled on Friday and by next week, he will be handed over to the appropriate authorities for prosecution.

He is only serving physically in Makurdi, but his command is in Lagos State. So, the correspondence has taken some time too.”

The NAF Director of Public Relations and Information, Air Commodore Olatokunbo Adesanya, confirmed the court-martial, adding that it would “take place shortly.” He said;

“We have a procedure in the military and we don’t jump the process. There is a disciplinary committee which goes through investigations, boards of enquiry, summary of evidence and so on.

“The last stage is the convening of the court-martial. From all indications, we are at that stage now and it will take place between this week and next week. It will take place shortly. The NAF can never sweep the matter under the carpet, because the crime was an embarrassment to the service.”

Posted by mediaceo
Labels: news
Email ThisBlogThis!Share to TwitterShare to Facebook
at 09:07