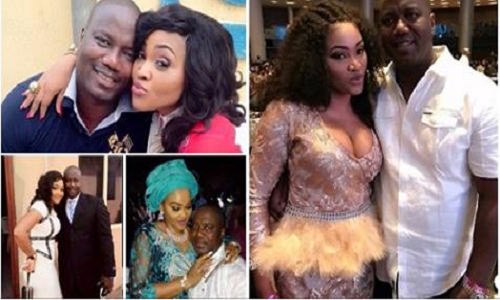 Towards the end of last week,news broke that the marriage of nollywood actress, Mercy Aigbe to Lanre Gentry was about to hit the rock, even with her pictures showing her battered face all over the blogosphere, many people hoped that it was a publicity stunt.
However, as Saturday Beats learnt, the marriage may have fallen apart irretrievably. In a chat with her estranged husband Lanre, he insisted that he had never beaten his wife. He further claimed that the ace actress has mental illness which he said is affecting her.
Gentry revealed that Mercy had been battling the illness for a while but that he had always been there for her all through the years they had been together.

He said,
“I am not fighting with Mercy, she is the one plotting how to get out of the marriage and I am not a party to that because I have never touched her and I will never do so. She has mental problem and that is what is disturbing her for now. There is a place I normally go to help her get herbal concoction to stabilise her condition, I would go there soon to get the herbal remedy for her. I don’t care about whatever anybody writes, I have granted an interview with the person that I trust.”

The auto dealer claimed that the mother of two had been unfaithful to him, adding that she left his house for over a month.

He said, “Mercy is committing bigamy because she is still married to me and another man has rented an apartment for her. She has left my house for almost a month and she has been camped with the man. Marriage is not by force, I cannot force her to stay with me because I am not handicapped. She spends my money. The car she uses, I bought it for her and it cost me about N9.8m, I have the receipt with me. I don’t have anything against Mercy but she should continue with whatever she has against me.”

“I don’t have any issue with Mercy. She has found a better offer than the love I give her so she wants to move on. I have helped her career and put her in the limelight but now she believes she needs another man that she can dupe. I have God by my side. I still saw Mercy during the week, Wednesday to be precise. It was reported that she obtained a restraining order against me but the truth is that it is a kangaroo injunction. Is it possible for the court to restrain me from seeing my child or a person that took my property out of my house? Is it possible? I learnt she went to the police but they did not lend her a listening ear so she decided to use the judiciary and we would meet there. She went to the Lagos State government and was told that they prefer to reconcile marriages instead of dissolving them. I have never beaten Mercy and I would never do such,” he said.

When asked if he still loves his wife, the estranged husband who has a child with the actress simply said,

“For now I cannot say that I love my wife but before, I loved her.”

When Saturday Beats reached out to the actress, a source from her camp who spoke on the condition of anonymity said that it was laughable that Gentry would claim that the actress has mental problems. The source said that the estranged husband turned the actress to his cash cow.

“It is a big lie, the truth is that Lanre Gentry has been living off Mercy’s hard earned money. In fact, Mercy is his walking ATM. He does not do anything and to make matters worse, he does not pay the children’s school fees. The man is a mad man. A court paper was served on him on Wednesday and when they took it to his office, he claimed that he was Lanre Gentry’s personal assistant, unknown to him that his picture was taken while he was signing for the document he received. He is just shooting himself in the foot.

“He knows within himself that Mercy can afford to get a house in Lekki if she wishes to do so. He is just a pathetic liar and he should find another angle. Mercy does not have mental illness and if he wants to dent her image, he should look for another angle to do so,” the source said.

In a telephone conversation with Saturday Beats, she maintained that she would rather remain silent on the matter till the court decides the fate of her husband who has been charged with wife battery allegations. She said that she believed in the Nigerian justice system and she is optimistic that justice would prevail.
Posted by mediaceo
Labels: Gossip
Email ThisBlogThis!Share to TwitterShare to Facebook
at 10:03