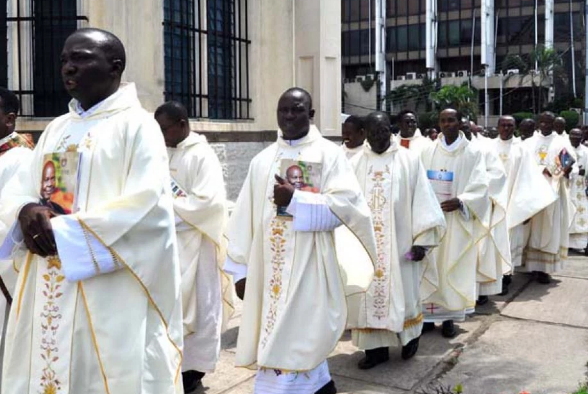 First, it was in Kaduna, where a Catholic priest was suspended and disrobed because he fathered children. Now it is in Ebonyi, precisely Abakaliki, where another suspended Catholic priest, Christopher Okorie, has just wedded his sweetheart at a court registry.
These are just the little that the public know. Many priests are impregnating women and fathering children every day. It is not new. Many of them have secret girlfriends and wives.
I don’t know why the Pope would not allow them to marry. Those of them that cannot hold their p*nis should be allowed to marry. It is also true that many of the men that found their way into the priestly vocation were not called to be there.


But since there is no effective way of screening them out, those of them that want to marry should be allowed to do so, to save the priesthood from this show of shame and disrespect

Posted by mediaceo
Labels: Gossip
Email ThisBlogThis!Share to TwitterShare to Facebook
at 09:58