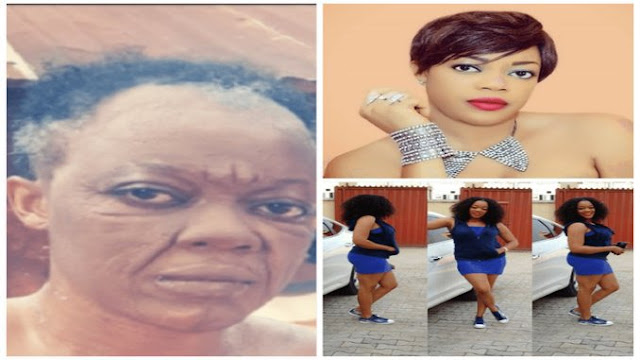 The Nigerian make-up industry is one sector that has constantly evolved, keeping up with the western world. The use of makeup has gone far beyond just being used daily by most women.
Today, the movie industry (especially Nollywood) cannot do without makeup artists as it is of maximum importance that they produce movies that are convincing. As many of us already know, making a film believable can be a very tough job, though possible.
There are various elements to consider when it comes to making a film believable, but one of the most important rudiments is making sure that the characters look realistic, which proves difficult or simple depending on the character to be created.
However, as hard as the art of transforming a person to fit into a described character can be, Nigerian make-up artistes have proved to be equal to the task. These transformation pictures of some of our beautiful Nollywood divas will definitely convince you.

Rita Dominic in The Meeting. Thumbs up to the makeup artist that did this very well-done job! I can only imagine the amount of time and patience it took to achieve this look.
With the obvious improvements in movie productions, styling and make up has gone to the next level synonymous to Hollywood. Though there’s always a space in the room for improvement, with improvements like this, the future is bright!

Lala Akindoju as Landlady in Suru Lére. The movie is another interesting piece from Rita Dominic & Mildred Okwo of the Audrey Silva Company.
As a result of the massive success of The Meeting, the company engaged in the production of Surulere, their second film since the company was founded by the two women in 2011.
It’s really nice how these makeup artists are letting us have a peep into the future of these ladies at least my brothers will be able to consider now and later before making a move. Lol.

If you are wondering who this old woman is, wonder no more. This is Eve Esin. Yes, the Nollywood actress you know.
If you have ever imagined how she will look in her old age then this is it! One of Nigeria’s best makeup artist, Hakeem Effect Onilogbo, took his time to transform our screen diva from the beautiful lady we all admire into an old hag.

6. Toyin Aimahkun Seriously, with makeup anything is possible! Toyin Aimahkun was transformed into the picture you are seeing for her role in the movie Iya Ibadan. See how dark she looks! I’m sure if her real pictures were not placed beside her you won’t have known it was Toyin. Good job!

Funke Akindele in Maami. Funke Akindele aka Jenifer, is one actress who has been turned into many things to suit the character she represents. this time she is taken to about 20 years into the future. I really like those granny eyeglasses.
4. Mercy Johnson-Okojie

This astonishing makeup on Mercy Johnson was done by Gabazzini. The reality of the makeup raised a lot of dust as most news sites circulated the information that our beloved Mercy had gone blind just a few months after she got married. It was however nerve-calming to eventually find out that it was only a makeup for a movie shoot.
3. Charity Eke

This movie set in a village, has Chacha Eke playing a weird but interesting role. The actress plays the role of an old woman who has an eye for young Mike Ezuruonye. One gbosaaa to the makeup designer who didn’t do bad at all in turning Chacha to an unrecognizable old mama. I’m sure this is not how she will look when she’s old though.

Ini Edo in Úchechi The Blind Cripple. As soon as I saw this picture of Ini, the question that came to my mind was: what if this was her look in real life? Hmm! God forbid o. The movie is said to be a true life story of a gruesome attack on INI EDO by her real life step sisters, over a lover.1. Angela Okorie

This makeup business is a serious one o, if not I wonder how Angela Okorie was able to sit and allow one makeup artist do this to her. What can I say? The makeup looks irritating, if that’s the idea behind it then the designer nailed it. I won’t let that dirt be put on my skin shaa. Looks like it smells too. Ewwwww!
Posted by mediaceo
Labels: entertainment
Email ThisBlogThis!Share to TwitterShare to Facebook
at 09:58