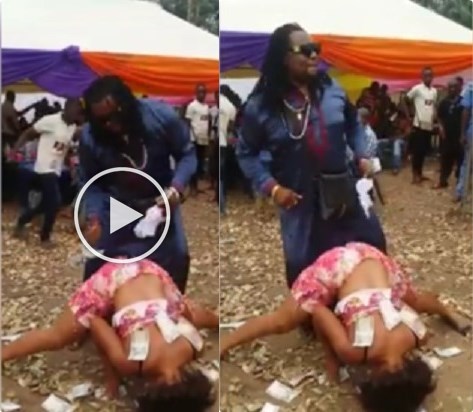 A Nigerian man said to have arrived the country from abroad has taken many people by surprise at an event as he was entertained by a dancer who twerked for him.


The dancer twerking for the man in public

A Nigerian man based abroad has become the cynosure of all eyes at an event after he showered cash on a dancer twerking for him.

The unnamed man said to have returned to the country after making money abroad could be seen dancing with the lady before unleashing loads of cash on her.
The female dancer twerked more as cash was sprayed on her. People stared in awe as the showoff continued. This happened at a ceremony in the eastern part of the country judging from the music playing in the background.

Posted by mediaceo
Labels: Gossip
Email ThisBlogThis!Share to TwitterShare to Facebook
at 09:34