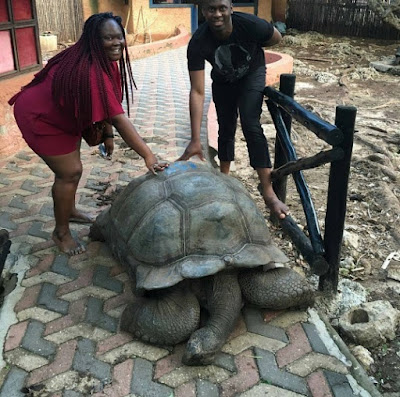 According to the source who sent in this photo Alagba, a giant male land tortoise believed to be 330 years is still  alive at the palace of Ogbomoso King in Oyo State.The legendary tortoise who lumbers about in the palace is popularly called “the elderly one”.
heavily on oral history. Its present age was arrived at by situating it with the period of the Soun who reigned then. Alagba was allegedly brought to the palace by Soun Ikumoyede Ajao,the third Soun of Ogbomoso, who is believed to have been born sometime in the late 16th century and who reigned in the 17th.

Mr. Ajamu Oluwatoyin, the secretary of the current Soun says dating of the kingship of Ogbomoso was started by the elite in 1797 during the reign of Oba
Toyeje Akanni (1797 to 1825), the fourth Soun and one time Are Ona Kakanfo (the Yoruba Nation Generalissimo).Tourism is never complete in Oyo State without visiting the ancient giant male land tortoise.It is a sacrilege to call Alagba a mere tortoise in Ogbomosoland.
Guinness Book Of Records where are you, because if its age can be verified to be accurate then we nigerians have the worlds oldest tortoise and not that small boy called Jonathan who is currently holding the record.
For those of you who dont know The World’s oldest tortoise is a tortoise named Jonathan, and it is just 184 years old
Posted by mediaceo
Labels: Gossip
Email ThisBlogThis!Share to TwitterShare to Facebook
at 09:46