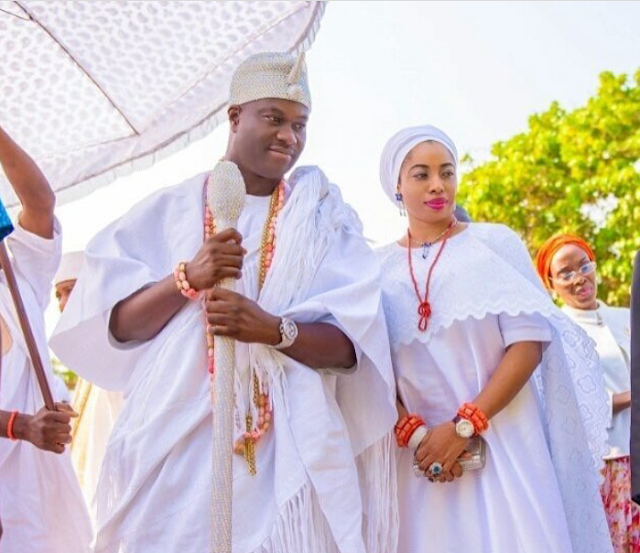 More details have surfaced online about the alleged reason for the marital crisis between the Ooni and his wife. Read below:
Insiders Reveal The Genesis Of Their Problem & How Deceit Ended The Royal Union
In the past one week, popular socialite Sonia Itotan who got the name of Wuraola Zynab Otiti Ogunwusi after she married Oba Adeyeye Enitan Ogunwusi last year has been denying that her marriage has crashed.
Insiders who claimed that the marriage has crashed beyond repair have revealed more dirty details surrounding their troubled union.
The sources revealed to NG exclusively last night that the Ooni of Ife & Sonia are yet to get over their marriage crash hence their denial in the face of prying eyes.

An authoritative source close to both couple said the foundation of their marriage was based on deceit, lack of love and passion for each other.

Wuraola according to the source portrayed herself to Ogunwusi as a fruitful woman who will bare him all the children he’s been looking for all his life, the proposal reportedly melt the heart of the then real estate mogul who proposed marriage to her 24 hours after they met.
However, Sonia who accepted the proposal under tension didn’t tell Ogunwusi she was still legally married to her Lebanese husband, who suffered a painful heartbreak after he heard that his wife who took some time off to unwind in Nigeria had married one of the most powerful monarchs in the world.
While the whole world is blaming Sonia for infidelity and adultery, another insider said King Ogunwusi too has so many fault that should never be overlooked.
The source said when the Oba consulted the Oracle for choice of wife, Sonia was not the name that was picked for him but he cunningly changed the name of Sonia to the name of one of the 3 women he presented all because he’s desperate to have a child and when Sonia’s fake baby bump secret and infidelity issue came open, he quickly lost his cool. The source said that was the origin of their problem.
Another source close to Sonia told NG on Monday that the socialite is very aware of her infertility problem before promising to born “plenty pikin” for the desperate monarch but along the line, she stopped her plan of using a surrogate mother after she was hinted of the rituals that must be performed once she deliver a child and how dangerous it is for her to bring a bastard into the palace.
Sonia was also called out for forcing the monarch to send his first wife, Adebukola Bombata Ogunwusi away from the palace after she alleged that she might cause her to miscarry her pregnancy even though she knew she wasn’t pregnant.
Her many lies and deceit at a point got to the king who was said to have lost trust in her about 5 months after their lavish wedding.
When she sensed danger, she quickly travelled to the United States for a couple of month.
Her prolonged absence allegedly made the king to be more suspicious before he sent her a message never to return to the palace.
As we speak, Sonia who returned from the United States few weeks ago has relocated to one of her mansions in Abuja.
The only time she is expected back at the palace is to come and pack her belongings.
Before now, the Olori has been going about with fake baby bump to show the outside world that she’s expecting Ogunwusi’s first Prince, sadly all ended in disappointment when her best kept secret of using a surrogate mother was exposed.
The last straw that broke the camel’s back is her alleged infidelity issue. In the course of her short-lived marriage to Oba Ogunwusi, Sonia had been romantically linked with Mr Tunde Ayeni, the former Skye Bank Chairman and one Dapo Abiodun.
As we speak, the estrangled couple have started throwing punches at each other.
Sonia’s camp alleged that the Ooni targetted Wuraola’s wealth and wide contacts and threatened to attack her with charms, claiming he had eaten a live human’s heart.
Sonia’s friend also alleged that the young Ooni has a tempestuous character.
Another source who waded into the matter said Sonia who has lot of wealthy men on her remote control is fond of hopping from men to men.
The source concluded by blaming the Ooni for refusing to yield to elders who advised him against marrying Sonia.

Posted by mediaceo
Labels: Gossip
Email ThisBlogThis!Share to TwitterShare to Facebook
at 05:19