Oh My…!! See The 17 People You Won’t Believe God Created Or Exist (Photos) 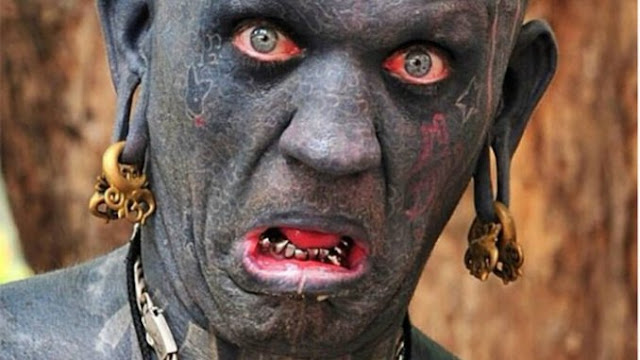 With over 7 billion people in the world you just never know what you will really find out there. There are huge people, tall people, short people and many other types of people out there. And then there are these people.
Get ready for your mind to tell you that these are not real but we assure you that every single photo is 100% authentic with absolutely no Photo-shopping involved.
it

That’s right! Here is the tallest man in the world meeting the world’s shortest man, Chandra Bahadur Dangi. The 75-year-old man from Nepal is 1 foot, 7 inches tall.
2. The Pierced Man

This German native Rolf Buchholz is actually a normal 55-year-old man. The only thing different about him is that he holds the world record for the most piercings on a body.
3. Papa Surf

Paul Karason’s skin turned blue 17 years ago after he used colloidal silver to treat a skin condition. The FDA banned silver in over-the-counter meds as it causes argyria, which causes the silver to react with sunlight turning skin a dark blue. Karason passed away from a heart attack, unrelated to his condition, in 2013.
4. My Size Barbie

This life-sized barbie, Valeria Lukyanova, a 29-year-old who actually looks like a “Human Barbie.” The Ukrainian model insists her looks are 100% natural, except for breast implants. Valerie’s look requires plenty of upkeep including daily gym sessions and special diets.
5. World’s Hairiest Man

China’s Yu Zhenhuan is officially the world’s hairiest man. With 96% of his body covered in course black hair, he never needs to worry about bringing a sweater along in case it gets chilly.
6. This Buxom Lass…

Mayra Hills has the largest breast implants on the planet. As an adult model known as “Beshine” has claimed to have a size 32Z and says that she has no back problems.
7. Most Tatted Woman

Julia Gnuse’s body is 96% tattooed. She started her tattoos by covering up a skin condition and didn’t look back.
8. Most Tatted Man

If you thought the last one had a lot of tattoos, Lucky Diamond Rich holds the world record for having the most tattoos covering 100% of his body in ink.
9. World’s Widest Hips

Mikel Ruffinelli’s husband hit the jackpot when it comes to curvy women. His wife sports the widest hips in the world, measuring 8 feet all the way around.
10. Steroid Man
This is the result of being hooked on steroids.
11. Steroid Women
And yes women take them too…
12. Edward Giant Hands

From the time he was born, Kaleem’s mother knew he was different. He came out of the womb with hands twice the size of a normal infant, and they never stopped growing! Unfortunately the 9-year old’s hands now weigh more than his head and make accomplishing simple tasks extremely difficult. Doctors are unsure what has caused such an effect in an isolated an area.
13. Tallest Man In The World

You may recognize Jyoti Amge from American Horror Story: Freak Show, but did you know she really is the smallest woman in the world? Her restricted height (2’1″) is due to a growth anomaly called achondroplasia.
15. Strongest Man

“I am a very proud and gifted empress queen. I am the black Rapunzel.”
-Asha Mandela
The Atlanta woman and native of Trinidad has the world’s longest dreads at over 19ft.
17. Two Heads Are Better Than One!

These girls were born like this, Abigail and Brittany Hensel, are very remarkable. As conjoined twins, they each have their own head and set of internal organs, but since they share one body each twin controls one-half of it.

Posted by mediaceo
Labels: Gossip
Email ThisBlogThis!Share to TwitterShare to Facebook
at 06:29