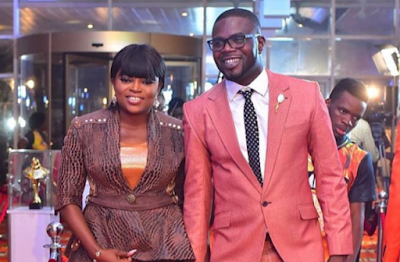 Rasheed Bello popularly known as JJC Skills has revealed the interesting love story of how he met his beautiful actress wife, Funke Akindele. Read What he said below,


"It sounds like love at first sight. Well, I would say so, because the first time I saw her, I was wowed.
"When I met her, I just met someone that wanted a director for her TV show; Jenifa’s Diary. That was in 2013. We have been going on for a long time, people just found out in 2016. We were very low key because we are two popular people in the entertainment industry. We had to protect our privacy. Her sister introduced us.

I’m a romantic person, so I gave her a dose of it. It wasn’t in an open place because only very few people knew it then. So, that very day, she came home to meet flowers, candles everywhere; quite a romantic set up. When she saw it, she had no choice than to say ‘Yes’.”
The lovely couple got married in London back in August 2016.


Culled from TribuneNg.
Posted by mediaceo
Labels: entertainment
Email ThisBlogThis!Share to TwitterShare to Facebook
at 06:09